Well, what a couple of weeks we have had. The weather on Anglesey has been varied, to say the least. After a very wet couple of weeks, it has got drier and colder. We have now discovered that the pond does need lining – the ducks are unlikely to like a stagnant puddle! Although it was full for most of December, as soon as the weather dried up the water level dropped, so there is a good supply but it doesn't hold. We have also decided that the pond needs to be bigger, so another digger hire is on the cards!

Last time I promised an update on the aggressive cockerel. Clyde is a Cochin and a large one.when we first moved in he was fine with me, not creating any problems, although right from the start he was trying to stamp his authority on Suzi. In recent weeks, though, he has taken to going for me, too, whenever I go near him. We have sought advice, from the previous owners, other experts, and it seems that none of the potential solutions work. Various suggestions were made as to what could be done. 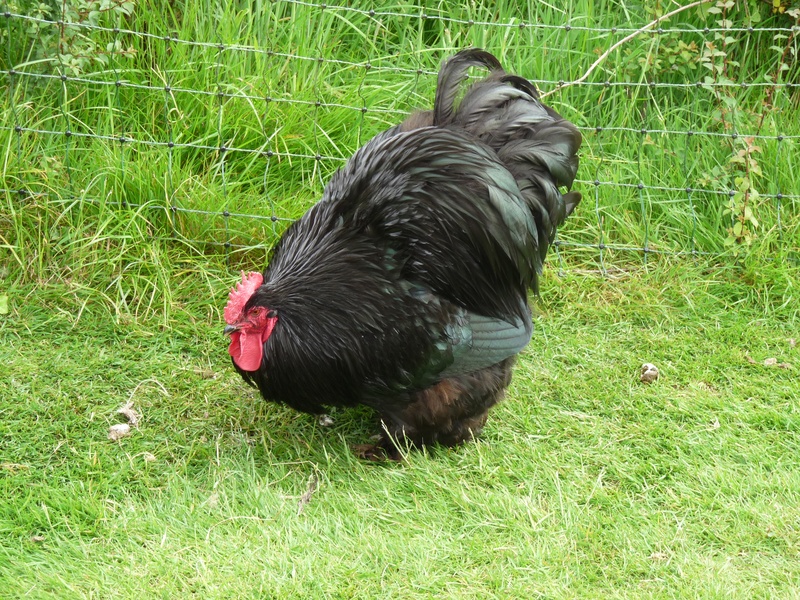 Wearing different clothes, standing firm, staring him out, not turning one’s back – all these were suggested but none have borne fruit. I am the only one that can deal with him now and I have to segregate him if I need to clean out the hen house or check on eggs. There is now a comedic dance that goes on whenever I need to move him, as we both posture and strut for position, like some strange Argentine tango! Anyway, we knew that this would never be easy!

I never knew I was a fan of dancing until the Strictly Come Dancing phenomenon but we even a couple of weeks ago went to see Anton and Erin’s fabulous ‘That's Entertainment’ show at Llandudno. 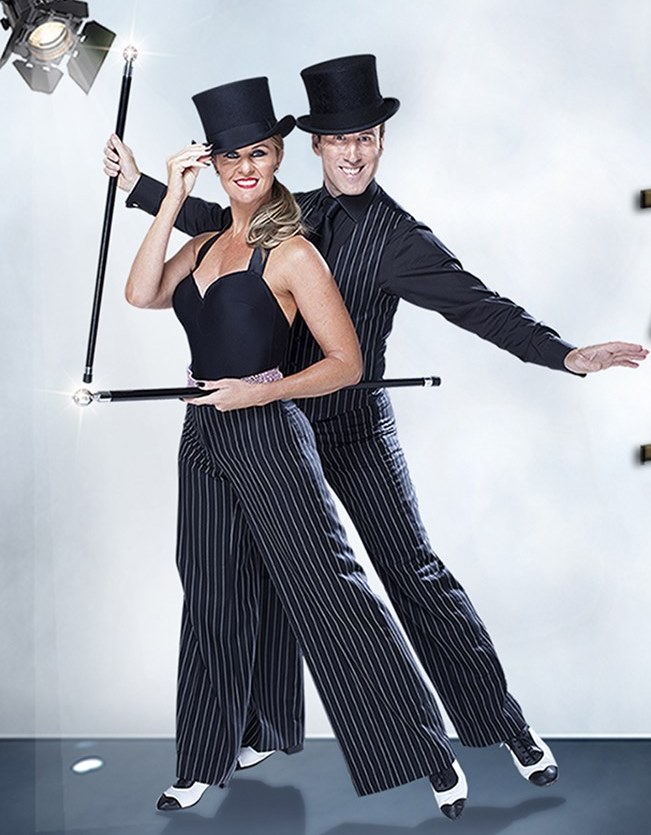 Not that you'd get me out on the floor but it is good to watch. Mind you, we did drop the average age when we walked in!

Other works that are going on include the driveway repairs. The drive is about 300 metres and rutted and potholed, which challenges smaller cars. Poor Dom’s Smart Car did struggle – but it is so small he could drive down the middle of the track and miss most of the holes. Anyway, we had to grasp the nettle and get the drive repaired – although one neighbour suggested helpfully that if the drive is too good you'll get all sorts of callers! We do need to make it somewhat better for our visitors, however, so we bought a couple of tonnes of slate clippings and I spent a very happy couple of days filling and compressing the worst of the holes. Even better the weather was glorious! 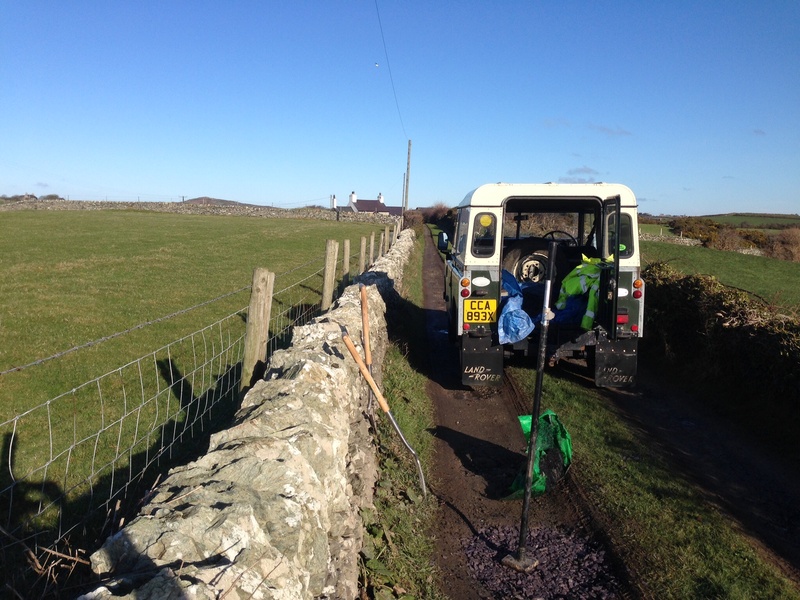 The job is almost finished and then it will be much improved!

The work on the polytunnel has stalled pending better weather but the preparation of the ground for the kitchen garden outside for the hardy crops is the next priority. We have been working inside while the weather has been less than clement and the library is nearing completion. The new fireplace has been installed (we used the Fire Works at Llangefni – they did a great job, although the need to put in a vent through an 18 inch thick wall was a challenge!) and we now have the surround tiled, using Spanish tiles collected by Suzi’s great-grandfather at the turn of the last century. They look brilliant – as you can see. 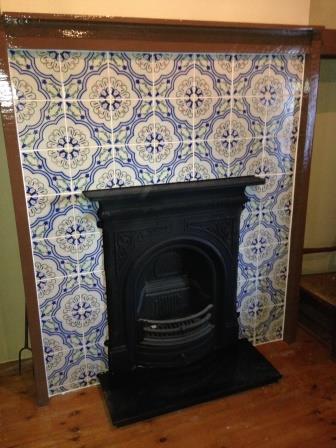 A great tiling job was done by Geoff, recommended by Izzy and Mikey. I think he'll get more work from us!

Suzi has been very happy choosing paint, material and other soft furnishing ready for when we have the B&B room ready. It has been somewhat frustrating trying to get the work done, but we now have the designs and are just waiting on prices. I never knew that there were so many types of shower, taps and baths! By the time the next blog is published I hope we might have the room ready.

In preparing the area for the growing we know we will need to have more storage so we are just off to choose a shed. What fun! We have also decided that the ‘garage’ in the barn is too small for the Land Rover (he is still to be named) so we are going to have to put up a garage for him. It also means I will be able to use the barn space as a workshop (or man-cave, as Suzi calls it), which is very exciting!

Ah, well. It is is time to head to the shed shop – more soon, when I hope to give an update on the arrival of pigs.

Reply moncler jackets
3:17 PM on September 3, 2020
Oh my goodness! a tremendous article dude. Thanks However I am experiencing issue with ur rss . Don?t know why Unable to subscribe to it. Is there anybody getting similar rss problem? Anybody who knows kindly respond. Thnkx
moncler jackets http://www.monclerjackets.us

Reply golden goose
8:42 PM on September 4, 2020
I was very happy to search out this net-site.I wished to thanks in your time for this glorious read!! I undoubtedly enjoying every little bit of it and I've you bookmarked to check out new stuff you blog post.
golden goose http://www.goldengoosesneakers.org

Reply balenciaga sneakers
5:35 PM on September 5, 2020
There are some attention-grabbing time limits in this article however I don?t know if I see all of them middle to heart. There may be some validity but I will take hold opinion until I look into it further. Good article , thanks and we wish extra! Added to FeedBurner as properly
balenciaga sneakers http://www.balenciaga.us.com

Reply hermes birkin
2:37 AM on September 7, 2020
you've an excellent blog right here! would you wish to make some invite posts on my blog?
hermes birkin http://www.hermesbirkinbags.us.com

Reply golden goose outlet
7:41 PM on September 7, 2020
I found your weblog website on google and test just a few of your early posts. Proceed to keep up the excellent operate. I simply additional up your RSS feed to my MSN Information Reader. In search of forward to studying more from you later on!?
golden goose outlet http://www.goldengooseoutlets.us

Reply kd 11 shoes
3:23 AM on September 9, 2020
Aw, this was a really nice post. In thought I wish to put in writing like this moreover ?taking time and precise effort to make an excellent article?however what can I say?I procrastinate alot and in no way appear to get something done.
kd 11 shoes http://www.kd11.us

Reply off white jordan 1
4:55 AM on September 11, 2020
You made some decent points there. I looked on the internet for the difficulty and found most people will go together with along with your website.
off white jordan 1 http://www.offwhiteshoes.us.com

Reply supreme clothing
8:59 PM on September 11, 2020
I found your blog website on google and test just a few of your early posts. Proceed to maintain up the superb operate. I just extra up your RSS feed to my MSN Information Reader. Seeking forward to studying extra from you later on!?
supreme clothing http://www.supremesonline.com

Reply goyard
4:40 PM on September 13, 2020
There may be noticeably a bundle to know about this. I assume you made certain good points in features also.
goyard http://www.goyards.us.org

Reply balenciaga shoes
2:13 PM on September 14, 2020
I found your blog site on google and verify a number of of your early posts. Continue to keep up the excellent operate. I simply further up your RSS feed to my MSN Information Reader. Seeking ahead to reading extra from you later on!?
balenciaga shoes http://www.balenciagas.us.com

Reply yeezy
5:32 PM on September 16, 2020
Spot on with this write-up, I really suppose this web site wants way more consideration. I?ll in all probability be again to learn way more, thanks for that info.
yeezy http://www.adidasyeezys.us.com

Reply calvin klein outlet
4:22 AM on September 18, 2020
There are some interesting time limits on this article but I don?t know if I see all of them middle to heart. There is some validity but I will take maintain opinion until I look into it further. Good article , thanks and we would like more! Added to FeedBurner as nicely
calvin klein outlet http://www.calvinkleinoutlet.us.com

Reply yeezy shoes
8:59 PM on September 18, 2020
I?m impressed, I need to say. Actually not often do I encounter a weblog that?s each educative and entertaining, and let me tell you, you've got hit the nail on the head. Your idea is outstanding; the problem is something that not sufficient persons are talking intelligently about. I'm very completely satisfied that I stumbled across this in my search for something relating to this.
yeezy shoes http://www.yeezyshoessupply.com

Reply air jordan
3:15 PM on September 20, 2020
You made some first rate factors there. I regarded on the internet for the difficulty and located most people will go together with with your website.
air jordan http://www.jordans.com.co

Reply yeezy boost 350 v2
5:05 AM on September 21, 2020
Youre so cool! I dont suppose Ive learn anything like this before. So good to find any individual with some original thoughts on this subject. realy thank you for starting this up. this website is something that's needed on the internet, somebody with slightly originality. useful job for bringing something new to the internet!
yeezy boost 350 v2 http://www.yeezyboost350v2s.us

Reply cheap jordans
5:17 PM on September 22, 2020
I'm usually to blogging and i actually respect your content. The article has actually peaks my interest. I am going to bookmark your website and keep checking for brand spanking new information.
cheap jordans http://www.cheapjordans.us.com

Reply adidas yeezy
11:49 AM on September 23, 2020
This website is really a stroll-by for all of the info you needed about this and didn?t know who to ask. Glimpse here, and also you?ll positively uncover it.
adidas yeezy http://www.shoesyeezy.us