Episode 4 - The first Christmas plus polytunnel and Library progress

My, how time flies! It is amazing to think that we have now been here for more than two months and we are now in 2015! Happy New Year, everyone!

In the run-up to Christmas and the arrival of various special guests we were determined to get the ‘Library’ up and running. This room will be a place with lots of our books, pictures, Elvis (more of whom later) and the piano. It will also double as our dining room and the B&B breakfast room.

The room had been formerly the dining room, but was hampered by a reconstructed crog-loft, that was not usable, but which seemed to dominate the whole space. We were keen to remove it and get the place opened up. On 16th December it was decided to get it as complete as possible by Christmas. 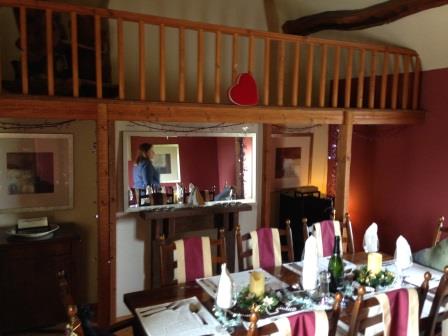 We cracked on. I was delegated with the demolition work (note to readers – don’t try this yourself - unless you go to the hardware store and get lots of power tools, hammers, chisels and saws – and, of course, a workbench!!!) 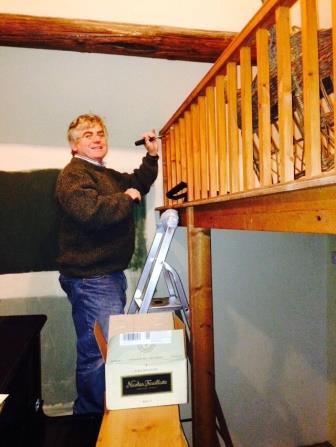 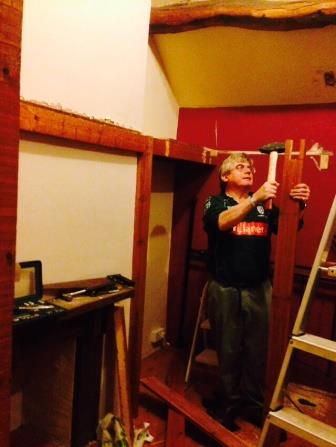 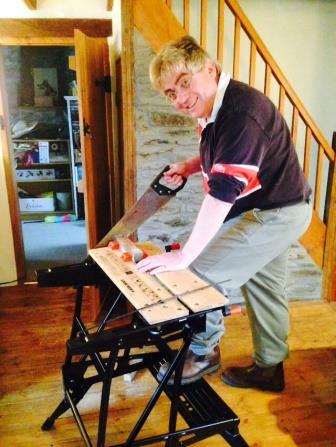 Suzi worked on the décor, selecting the colours and doing the majority of the painting, and the acquisition of curtain poles, soft furnishings and other furniture, as well as supervision and direction. 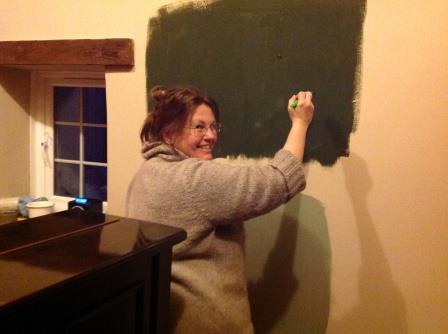 There was also a chance to get some of our pictures out and cleaned ready for display. Having had stuff in store for ages, it was good to see them again. 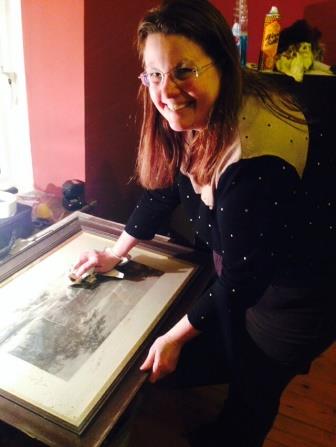 When we moved in the room was used as store, so the first job was to get the room cleared, so the boxes were moved again – admittedly with some unpacking!

It was a frenetic time – barely time to get some Christmas shopping done or a game of Spider Solitaire (which is the Cae’r Bryniau equivalent of Angry Birds).

Mother-in-law arrived on 23rd and was roped into hanging curtains and supervising the hanging of Elvis.

Elvis is more correctly Michael Jackson. Confused? You should be…

Michael Jackson is a fine stag, shot at Ardross in Scotland in 1911 by A G Grenfell, Suzi’s Great Grandfather. After many years of hanging in one location in Cheshire he suffered an ignominious fall from the wall and broke his nose. 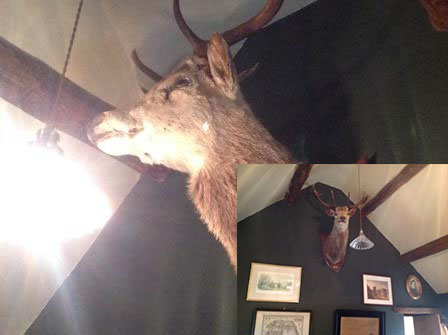 It was only after corrective nose surgery by the talented Jones’ that he was complete again, although hr doesn’t quite look his old self… hence the Jackson handle. Unfortunately someone who cannot be named kept mixing Michael with Elvis (well they are both dead singers, I suppose) so he will be forever Elvis!

We completed the majority of the work on Christmas Eve and somewhat later than usual put up decorations on Christmas morning. 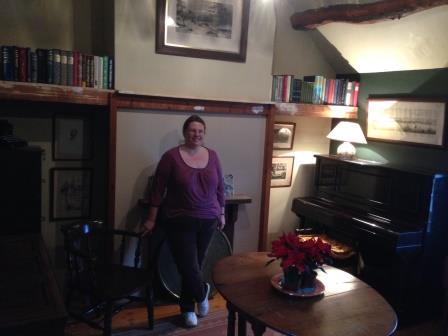 We also woke up Santa and he took up residence in his new home. 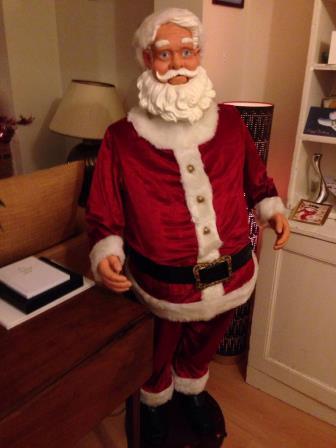 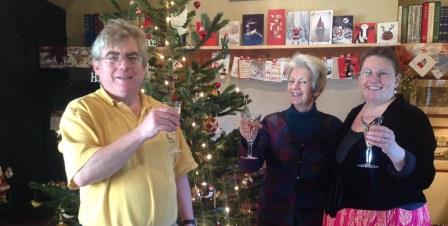 Christmas and New Year was a lovely time of food, friendship, walks and recharging the batteries. The daily duties of chicken husbandry are hardly a chore, except when the wind is so cutting that you can feel it slicing through you. We knew that Anglesey is windy, but our first winter has been very windy indeed! 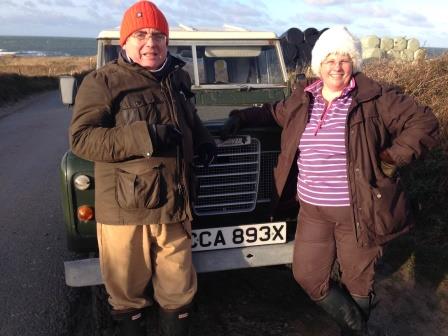 Talking of wind, the preparation for the polytunnel has been going steadily. The location was very important because of the prevailing wind and after lots of standing out in different weathers we chose a spot on the eastern side of the site, sheltered from the prevailing wind by a rocky outcrop. Having sampled the winds, it’ll be fingers crossed! Finding gaps in the weather I have now got all the foundations posts in ready for the hoops, which is the next job. 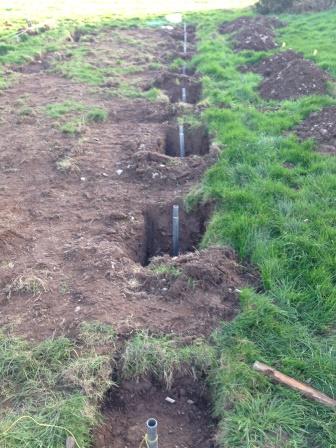 Instead of being put into hibernation until next year, Santa wanted to be closely involved with the works. We found him with his Hi-Viz on ready to get outside, but his DIY skills are a bit dodgy, so he was over-ruled!

We are looking forward next week to the installation of a fireplace in the Library – the chimney sweep had a difficult job getting it cleaned and the contents of the chimney included a nest and a desiccated jackdaw!

Next time I will give an update on the chickens and the problems of an aggressive cockerel! This morning, however, it looked as though one of the hens had metamorphosed into a pheasant – apologies for the blurry picture. Now, where’s the rifle? 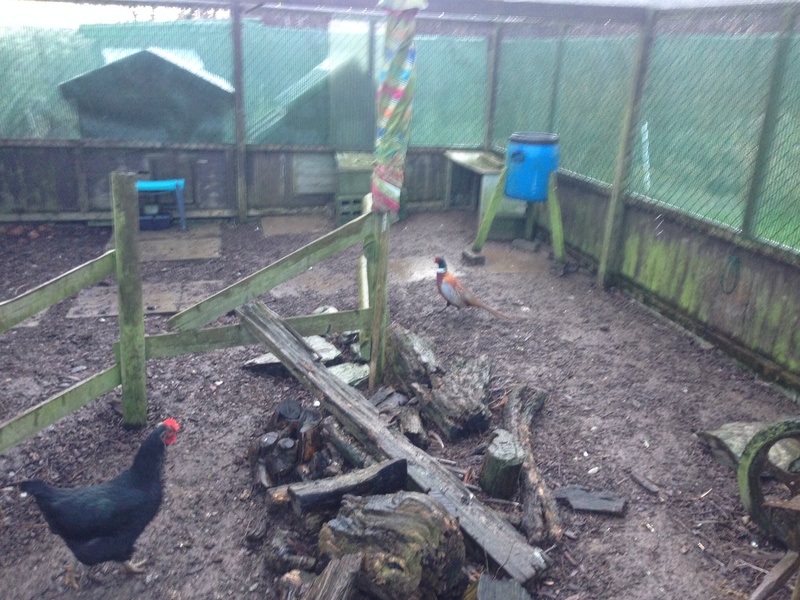 Categories: The smallholding, The livestock, Accommodation

Reply cheap jordans
6:37 PM on September 3, 2020
you might have an excellent weblog right here! would you like to make some invite posts on my blog?
cheap jordans http://www.shoesjordan.us.com

Reply off white
11:48 PM on September 3, 2020
I was very happy to search out this internet-site.I wished to thanks for your time for this excellent read!! I definitely enjoying every little little bit of it and I've you bookmarked to check out new stuff you blog post.
off white http://www.offwhite.us.com

Reply balenciaga shoes
9:03 PM on September 5, 2020
It's best to participate in a contest for one of the best blogs on the web. I will advocate this web site!
balenciaga shoes http://www.balenciagaspeeds.com

Reply balenciaga sneakers
7:24 AM on September 6, 2020
You made some decent points there. I looked on the internet for the problem and located most individuals will go along with together with your website.
balenciaga sneakers http://www.balenciagasus.com

Reply yeezy boost 350 v2
11:46 AM on September 8, 2020
It?s onerous to search out educated individuals on this topic, however you sound like you recognize what you?re talking about! Thanks
yeezy boost 350 v2 http://www.yeezyboost350v2s.us

Reply off white clothing
11:47 PM on September 9, 2020
I?m impressed, I have to say. Really rarely do I encounter a blog that?s both educative and entertaining, and let me let you know, you will have hit the nail on the head. Your thought is outstanding; the problem is one thing that not enough people are speaking intelligently about. I'm very pleased that I stumbled across this in my seek for one thing referring to this.
off white clothing http://www.offwhiteclothing.us.com

Reply kobe shoes
11:40 AM on September 10, 2020
This actually answered my downside, thank you!
kobe shoes http://www.kobe-shoes.us.com

Reply kevin durant shoes
7:29 AM on September 12, 2020
Spot on with this write-up, I truly suppose this website needs way more consideration. I?ll most likely be again to learn much more, thanks for that info.
kevin durant shoes http://www.kd12.us.com

Reply cheap jordans
12:20 AM on September 15, 2020
There are certainly plenty of particulars like that to take into consideration. That is a nice point to convey up. I offer the thoughts above as basic inspiration however clearly there are questions just like the one you bring up the place crucial thing might be working in trustworthy good faith. I don?t know if finest practices have emerged around things like that, but I'm sure that your job is clearly recognized as a fair game. Each boys and girls feel the impact of just a moment?s pleasure, for the rest of their lives.
cheap jordans http://www.jordans.com.co

Reply yeezy boost
9:00 PM on September 16, 2020
Youre so cool! I dont suppose Ive read anything like this before. So nice to find anyone with some unique ideas on this subject. realy thanks for starting this up. this website is one thing that's needed on the net, somebody with a little bit originality. useful job for bringing something new to the web!
yeezy boost http://www.yeezy-shoes.us.org

Reply curry 7 sour patch
7:35 AM on September 17, 2020
Spot on with this write-up, I actually assume this web site wants way more consideration. I?ll probably be again to learn much more, thanks for that info.
curry 7 sour patch http://www.curry7.us

Reply jordan retro
6:28 AM on September 19, 2020
Your house is valueble for me. Thanks!?
jordan retro http://www.jordan-retro.us.com

Reply yeezys
3:07 PM on September 21, 2020
A powerful share, I just given this onto a colleague who was doing slightly analysis on this. And he in truth bought me breakfast because I found it for him.. smile. So let me reword that: Thnx for the deal with! However yeah Thnkx for spending the time to discuss this, I really feel strongly about it and love studying more on this topic. If potential, as you develop into experience, would you thoughts updating your weblog with extra details? It's highly helpful for me. Massive thumb up for this blog submit!
yeezys http://www.adidasyeezys.us.com

Reply kyrie spongebob
7:05 PM on September 21, 2020
I?d need to test with you here. Which isn't something I usually do! I enjoy studying a post that can make people think. Also, thanks for allowing me to remark!
kyrie spongebob http://www.kyrie5spongebob.us

Reply kd 10
4:41 PM on September 23, 2020
Good post. I learn one thing more difficult on completely different blogs everyday. It would always be stimulating to read content material from different writers and apply a bit of something from their store. I?d choose to use some with the content material on my weblog whether or not you don?t mind. Natually I?ll provide you with a hyperlink on your internet blog. Thanks for sharing.
kd 10 http://www.kd-10.us

Reply giannis shoes
8:43 PM on September 23, 2020
That is the proper blog for anyone who needs to search out out about this topic. You notice a lot its almost onerous to argue with you (not that I really would need?HaHa). You positively put a new spin on a topic thats been written about for years. Great stuff, simply great!
giannis shoes http://www.giannisantetokounmposhoes.com

Reply supreme clothing
6:03 PM on September 25, 2020
After study a couple of of the weblog posts on your web site now, and I truly like your way of blogging. I bookmarked it to my bookmark web site listing and will probably be checking again soon. Pls check out my web site as effectively and let me know what you think.
supreme clothing http://www.supreme-clothings.us.com
123...105Next »